Fundamental question: Do mathematics pathways really work? And, if they work in the short term, do they really pay off for students in the long run?

The evidence is in, and indications are positive for students in the long run. According to a recently published study from Lauren Schudde and Katherine Keisler, students in courses based on the Dana Center’s principles for math pathways have better college-level math enrollment and completion outcomes than those of traditional developmental education students three years later.

The Dana Center Mathematics Pathways (DCMP) principles call for students to take math courses (both developmental and college level) relevant to their programs of study and future career plans. More important, regardless of students’ developmental placement, students have the opportunity to enroll in and complete a college-level math course within one year or less.

At the end of three years, students who took courses based on DCMP principles were more likely to enroll in and pass any college math compared to all students in traditional developmental mathematics.

Compared to students in a traditional pathway who needed to take at least two developmental courses, students who took courses based on DCMP principles 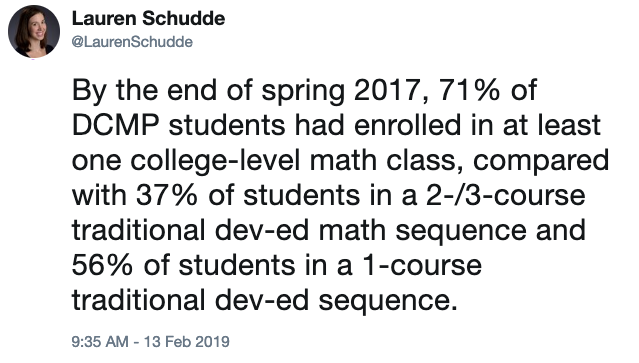 Why Do These Results Matter?

Completion of a college-level math course is a key accelerator and predictor of degree completion. Compressing the developmental sequence reduces attrition and the accumulation of student debt. By offering students rigorous and relevant mathematics content, they are better prepared to enter their program courses and future careers.

In addition, this study helps to address several critical questions from the field.

1) Does shortening developmental course sequences hurt students when they get to their college-level math course?

No. Actually, students in DCMP-based courses are more likely to pass their college-level math course.

2) Are students only passing because they aren’t taking College Algebra?

No. Giving students the option of enrolling in a math pathway that best fits their program and career needs has allowed for more students to pass college-level courses. Students who were placed in a math pathway that did not shorten their course sequence were still more likely to pass Statistics and Quantitative Reasoning while passing College Algebra at rates similar to students in the traditional course sequence.

3) Are the gains that we are seeing in the short term going to make a difference long term?

Yes. Creating accelerated math pathways has long-term impacts for students. Even three years later, students in courses based on DCMP principles were still enrolling in and passing college courses at higher rates and had accumulated more college credits.

4) Are the gains that we are seeing because students who are enrolling in DCMP-based courses are in some way different from students in traditional courses?

No. This study is comparing students who would be equally likely to enroll in the DCMP-based courses and takes into account student demographics.

Be sure to read the complete study, an open-access resource from AERA Open, and let us know what you think. 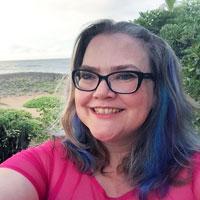 My parents and I would work logic problems when I was little and they always asked me the same questions. How do you know that’s the answer? Can you prove it? I come from a long line of teachers and lawyers, and I draw from both in my work as an educational researcher at the Dana Center. I have my father’s insistence on proof and accuracy, and my mother’s penchant for clearly sharing information. 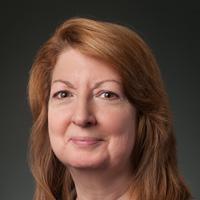 For the last 15 years, I’ve been working at the postsecondary level, teaching developmental and college-level mathematics as well as teacher prep courses before taking a role at the Dana Center, where I work with outstanding math faculty on curriculum and pedagogy.

Co-Requisites Are Better for Students Than Standalone Dev Ed Courses