A tight smile, worried eyes, and vice-like grip on the pencil gave away Luis’s fear. Even as he sat straight and still, with his backpack hung carefully over his chair, it was clear to those of us observing that the teacher’s direct instruction of the day’s mathematics lesson was not taking root in this particular seventh-grader’s mind.

Intently taking notes as he sat alone in the back of this underfunded urban classroom, Luis struggled to grasp the day’s topic: how to use equivalent ratios as a way to determine whether two quantities are related proportionally.

When the teacher paused for questions, a boisterous group of students near the front launched a fusillade of queries. Her focus on the front of the room, the teacher employed new strategies to explain the process, which a larger group—but still not all—of the students managed to grasp.

In the back of the classroom, Luis seemed frozen. As students began to practice on their own, Luis continued to silently struggle, without asking a single question or being engaged in a discussion by the teacher.

If you’ve worked in the classroom, you likely met a Luis—or a Jonathan, a Yoselin, a Krishnil, or a Doug—among your students. You may have interpreted their demeanor or actions as disinterest or retreat, and you may have made certain instructional choices in response.

As we continued to observe this classroom, the teacher paid little attention to Luis, and, during group work, no other students gathered with him to help make sense of the mathematical ideas being explored.

It was increasingly evident to our small group of observers that Luis felt that he did not belong in the intellectual community of this classroom.

Imagine. In four years, assuming Luis makes it through the next 3 grades, he’ll be taking 11th-grade math—probably Algebra 2 or Integrated Math 3. Based on his experience on this day, which we later learned was pretty consistent for him and several other students in that classroom, to what extent do you think he’ll feel like he belongs in his 11th-grade math class? How do you think he’ll do?

Untold millions of students in thousands of classrooms across the U.S. daily endure this same experience every day. Maybe you did too.

When students don’t feel they belong in their classrooms, their engagement falters. Even more troubling is the negative effect on their course-taking choices, their achievement, their learning, and their preparation for college and career.

Recent research on the psychology of belonging in academic settings tells us that when the adults in a school culture actively work to instill a sense of belonging in students, downward trajectories of performance can pivot toward achievement with remarkable speed.

For belonging, I’m using the definition developed by psychology researchers Catherine Good, Aneeta Rattan, and Carol Dweck. Their approach considers the extent to which students feel the following:

In short, the more that students experience membership, acceptance, affect, and trust (and the less they desire to fade), the greater their sense of belonging.

A profile of Good in Scientific American concludes by noting, “feeling as though you belong in a field, and that the learning environment is accepting, comfortable, and trustworthy, matters quite a lot—not only for people’s motivation to engage in a domain, but also how high they eventually soar.”

As a white male, I’ve pretty much felt like I belonged throughout my academic career. In fact, the feeling was so certain, it never even occurred to me that I might not belong. When registering for courses, I was told, “Of course you should take Honors Pre-Algebra,” “Of course you should take AP Calculus,” and so on. During classes, teachers always checked in on me and asked me questions. My belonging was a given. In fact, the experience that many women and students of color have in mathematics is so different from mine that I’ve made it part of my life’s work to close that gap wherever and whenever I get the chance—and to help other educators do the same.

With Luis, one of the classroom observers finally walked over and knelt by his desk.

And, as class was ending, someone reminded Luis: “Never forget that you are completely capable of doing this work, especially when you feel like you’re not. You’ve totally got this.”

And Luis’s tight smile loosened a little, and his eyes lit up. 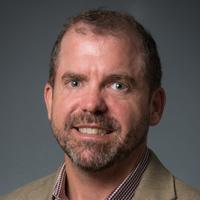 My career has been guided by the strong belief that each child—no matter his or her background—should have access to high-quality mathematics curriculum and instruction and should benefit from the educational materials, professional learning, leadership, and policies necessary to succeed in postsecondary study. As director of K–12 education strategy, policy, and services at the Center, I lead and support our K–12 services, online course programs, and digital platform services teams.

How can the Dana Center work with you to ensure that our nation's students are ready for postsecondary education and the contemporary workforce?